Warning: "continue" targeting switch is equivalent to "break". Did you mean to use "continue 2"? in /nfs/c10/h11/mnt/228043/domains/theculturecritic.net/html/wp-content/plugins/revslider/includes/operations.class.php on line 2715

Warning: "continue" targeting switch is equivalent to "break". Did you mean to use "continue 2"? in /nfs/c10/h11/mnt/228043/domains/theculturecritic.net/html/wp-content/plugins/revslider/includes/operations.class.php on line 2719

Warning: "continue" targeting switch is equivalent to "break". Did you mean to use "continue 2"? in /nfs/c10/h11/mnt/228043/domains/theculturecritic.net/html/wp-content/plugins/revslider/includes/output.class.php on line 3615

A griot, jali, or jeli is a West African historian, storyteller, praise singer, poet, or musician. The griot is a repository of oral tradition and is often seen as a leader due to his or her position as an advisor to royal personages.

Griots are present amongst most ethnic groups in Western Africa from the Mandes, Fulbes and Hausa to the Serers, Wolofs and Songhai but today I want to hone in on guewel-dom in the Mande and Wolof cultures as this is what I’m most familiar with and most intrigued by. 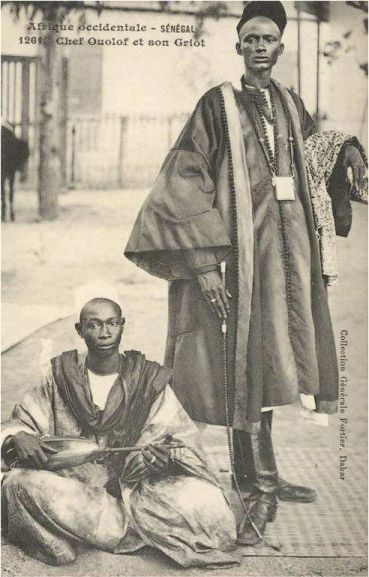 History is, no doubt, perfectly complicated. Infinite perspectives exist on any one thing and you can never fully capture any perspective except your own. Who holds our history? Dismantling this question begs me to ask  what is or can be defined as history and what does it mean to hold it? Can it be held? If so, who is qualified to do such holding?

It is important to understand guewels and their role in West African culture and society, past, present and forming. Historically, the duties of the guewel are based on lineage and require being a walking repository of local and regional history as well as current events i.e. death, marriages, new births etc. But perhaps their most commonly known role and in my opinion the most crucial, is that of being oral historians. While manding jelis often tell their stories and sing praise by entwining detailed stories of varied ancestry with stringed instruments like the kora, Wolof guewels often turn to tassu or short traditional songs that were passed on through grandparents and parents. A careful combination of lineage, cultural memory and captivating performance. Though most of us are able to briefly tagaa ourselves and our ancestral history (I can give you 1.5 sentences about bourba jollof and the kingdoms of serer past or Sunjata and the empires of Malian history before my tongue starts twisting), it is nowhere close to the scale and breadth of knowledge that jelis and guewels hold and that is something to be recognised for its value and craft.

There is no doubt as to the archival nature of guewel-dom within the Senegambia region and beyond. The art of Senegambian storytelling is a cultural practice that long predates the inescapable claws of Western colonialism, imperialism and mass destabilisation. Before the coloniser got in a boat and used the mouth of the River Gambia as their gateway into the rest of West Africa, griots had long cemented themselves as confidants, spokespeople and mediators in the hierarchical kingdoms of Sine-Saloum, Walo, Mali, Songhai and Fouta Tooro. This not only means that what it meant to be a guewel and the traditions embedded within it were established in conditions where western hegemonic ideas had little to no influence, but also that the art of being a guewel is less susceptible to the cultural-stripping that so often comes with neo-colonialism, late-capitalism and one-way “globalisation”. More pressingly however, is that because the way guewels practice their craft is defined outside of these external realms, it also strays far beyond what is considered in Western European terms to be a traditional archive. That is “a collection of historical documents or records providing information about a place, institution, or group of people.”

Central to the European construction of an archive is the idea of written, recorded or otherwise tangible (read: appropriatable, destroyable, commodifiable) snippets of history. The Senegambian concoction of lineage + the oral nature of the information passed + the visibility guewels have as holders of such history combined with the history of Gambia and Senegal as societies where the word was and at times still is, considered more important than the text, makes it so that even if one tried to archive our oral history, they probably could not or at least wouldn’t know where to begin. This for me is a small joy for many reasons the main bulk of which is that it makes it impossible for this information to be usurped by those who have no connection to it and it can never truly be understood except when explained by someone who is knowledgeable in the subject. This serves to make it an exclusive form of knowledge while also cementing the important role guewels and jelis play as guardians of it.

The conception of an archive as a perfectly preserved entity is imagined. The archival integrity that we often think of is a fallacy when one considers the conditions under which it was curated, who curated it and the purpose it was intended to serve. More relevantly, guewels and jelis are able to inject noise into the silences of the archives. As in you may be able to record the history of Kaabu but you can never capture the smooth sound of the xalam that accompanies such recounting. In the same way that authenticity, which in my opinion can never truly exist, is called into question when one talks of oral history, so should it be summoned in the case of archives. In the same way that oral history has gatekeepers in the form of guewels, so do archives in the form of the curator and subsequent archivists. But, unlike oral history where the same knowledge is known and kept by multiple people, archives are usually singular and isolated thus the pressures, thoughts and agendas embedded in it come to be considered as part of the archived itself. They come to be thought of as authoritative without much question into the sociological integrity of the record.

One could argue that the downside of oral tradition and cultural memory being a form of guarded knowledge that only few possess is that it can become exclusionary as it doesn’t allow those outside of Senegambian culture to fully embrace or recognise the richness of its history. I shun this line of thinking. In my opinion, the defining feature of culture is its exclusivity; the boundaries that are drawn between not/ours is what makes culture recognisable as belonging or stemming from a particular group of people. What does it mean to share or to be seen? When we talk visibility, it is essential that we think about those who already see and understand us as we are and what it would mean for us to disregard that gaze. And beyond that, whose gaze do we seek and why? The guewel manipulates, allegorises, portrays, protects and performs the word in a way that cannot be written or recorded. Transcendent if you will.

Doubtless, the craft of being a guewel/jeli is no longer what it used to be. As Senegambia has moved from kingdoms to borders so have guewels morphed into entertainer/artist/cultural rappers hybrids (think: the small degree of separation between the works of artists like Pape Thiopet, Dame Sene and Salam Diallo and contemporary Senegambian rap artists like DIP, ST or Ngaaka). This shift is inextricable from the necessity capital has created for us to engage with wage labour as a form of survival. Though the odd guewels exist who wayane and remain loyal to their gerrs who in turn give them halis, gifts etc, the vast number of guewels have found ways to monetise their craft in a way that ensures regular income beyond the sheer generosity (with a tinge of perceived cultural obligation) from others. Weddings, naming ceremonies as well as national and global stages have become their sites of performance. Seamlessly, they blend oral history with current events; they at once remind you of your rich ancestry while commending your present personhood. As in setti bourba jollof Njajaan Njay Ndoye, ni rek nga muna mel.

“[Ancient] Griots would accompany kings into battle to record their deeds and sing their
praises, so they were brave, they were militant. Today rappers have become militants, so
there is again no difference.”
-Fadda Freddy of Daara J Family

Despite this change in mode of presentation, the content revealed to us by jelis still carries as much history and tradition as it did in the times of Mansa Musa and Alboury Nidaye. Take for example the aptly named song ‘Ndiadiane Ndiaye‘ by Youssou Ndour (it’s one of my favourite songs of all time, go listen to it!) which gives a clear recount of the history of Ndiadiane Ndiaye and the kingdom of Walo as much as it entertains. This pattern is repeated in the majority of mbalax and manding songs, think: Kumu Neexul by Viviane, Maribantang by Jaliba Kuyateh, Songhai by Toumani Diabate, Ceddo by Lalo Kebba Drammeh and Saaraba by Aida Samb just to name a few.

The next time a guewel faces you, arms open recounting your lineage and describing your family tree branch by branch, while you’re fumbling around in your purse or haftan pocket for a dollar bill or a D10 note, do me a favour and lean in closer to them.. You hear that sound? It’s called guarded knowledge.